We publish the speech delivered by Director Laura Frigenti at the VI International Forum on Migration and Peace, held in Rome on 21-22 February 2017.

• The ‘common future’ in the title of this session - Migration and Development: Building a Better Common Future - has been part of the Italian Cooperation and Development perspective for some time. The law which established the Agency I direct expressed this perspective strongly when it referred to “protecting and promoting human rights, the dignity of individuals, gender equality, equal opportunity and the principles of democracy and the rule of law; preventing conflicts and supporting peace processes, reconciliation, post-conflict stabilisation, and the consolidation and reinforcement of institutions.”

We are facing great challenges to peace and security: endemic wars, rising tensions, terrorism, organised crime, as in South America. Conflicts and violence stifle development. Endemic wars and protracted humanitarian emergencies are debilitating threats. In the same way, climate and environment represent titanic challenges, and also create their refugees. On this subject, I’d like to point out that most displacements caused by climate change take place within the same country, involving moves from rural areas to cities, but also between different rural areas.

This is the framework for unprecedented migratory movements: what we are seeing is mass migration. This new phenomenon also constrains the aid community to reshape its traditional aid instruments towards new and more effective methods. But to do so requires a deeper comprehension of these phenomena. We have to reinforce our analytical capacity. We have to invest in statistics. We simply cannot manage our relations with developing countries using categories and paradigms from the last century. The report that I will present shortly is part of this effort.

Allow me to concentrate on the economic dimensions of this challenge. The economic gap between a European and an African is 70:1. At current growth rates, it will take 118 years to correct this imbalance. And creating jobs in Africa is only part of the solution: it is also necessary to confront the problem of the restrictions and the malfunctioning of markets and lack of regional integration.

We also need to improve our understanding of what is happening. In Africa, for example, an anthropological revolution is underway, affecting young people above all: they are far more independent than their parents, more ready to take initiatives, more connected and informed. This is globalisation: free movement of goods, money and people. But it’s also urbanisation. People move to cities in order to have more opportunities. And cities are frequently the first step towards the adventure of emigration. Today, African families have far less social cohesion. In many cases, individuals decide their own destinies, and are ready to take the risk of travelling to the unknown.

People in Europe – with much younger populations knocking at their doors, masses who in their own countries find personal fulfilment practically impossible – can easily be tempted by fear, by easy short-cuts and irrational proposals fed by the insane narratives of politicians. Our programmes for educating people on global citizenship are one response to these ‘shouted’ threats: we try to bring to our youth a culture based on awareness of others and comprehension of their choices – including their migratory choices – and to explain the collective benefits derived immigration. A new initiative being launched in 2017 will focus specifically on this. We also have to explain that three quarters of African migration does not involve leaving the African continent, and that this necessitates providing special support for transit countries: the flow of vertical aid provided by international organisations in, for example, an area in Ethiopia, to help Eritrean or Sudanese refugees, should be accompanied by measures designed to support the resilience of local communities.

We talk a lot about “migration and development” nowadays. But we have to distinguish between one-way migration and migrations that end by generating a return flux, not only economic (exile remittances) but also human (repatriation, willing or not, exiles who participate in the development of their native land, return entrepreneurs). Here, I’d like to emphasise the fact that circular or two-way migration is a potential growth factor (in a process defined by sector specialists as “co-development”) and that it can also contribute to improving conditions in the migrants’ home country. Here I’m referring to the role played by communities of exiles, which need to be listened to, understood and assisted to carry out the role that history assigns them, in a free but structured way.

In the final analysis, from an economic and development perspective, emigration should not be simply reduced and controlled, but also guided and organised. From a strictly economic point of view, all international studies highlight the positive effects that migration brings to development: each brain drain corresponds with a short term brain gain that in the long term can work to the advantage of migrants’ home countries: through earnings sent home, exchanges of experience and know how, plus cultural interaction, are all “mass effects” which are far more significant than our restricted micro-sector initiatives.

We have to equip ourselves to confront complexities, which are often frightening. Simplified approaches are not helpful: for example, creating jobs that produce goods and services is a necessary condition that is not sufficient on its own. While the creation of jobs and therefore of business enterprise, through the leverage of profit on development, can contribute to the reduction, organisation or containment of migratory fluxes, a parallel effort is needed to amplify and reinforce market demand for the goods and services produced. In certain contexts, the creation of jobs requires an accompanying boost of demand that can consolidate and improve the ability to supply. And this may not be sufficient. Private consumption or investment is not effective in stimulating signs of recovery in depressed economies. What is also needed is an intervention encouraging the development of regional markets, reinforcing them, abolishing tariff barriers and boosting broader circulation of goods and services.

And generally speaking, we should reason more in terms of innovation. In order to achieve the massive gains in efficiency that have been produced by mobile phone technology, there was no need to pass through land-line technology. That was a technological leap. And the results are there before us. Mobile banking was invented in Kenya (M-Pesa), not in Europe. Other technological leaps are possible. Tablets are being distributed in primary schools in Ethiopia, along with immediate demonstrations on how to use them. The smart city model need not be that far away, and its application to medium-sized cities in the developing world – reducing emigration to the bidonville slums of capital cities – is an option to be considered. Innovation in the service of development – such as single-dose syringes which are unusable after one injection – is a rarely explored territory which should discussed more often with partner nations. An example of authentic ownership.

To conclude, I’d like to focus briefly on one field with great potential, where Italy can make a major contribution: social enterprise initiatives. Thinking of the cooperative model, or of social impact financing. We have recently launched a small 5 million Euro pilot project supporting these new players, particularly aimed to involve young people. This kind of model is frequently requested from us in many countries. In this context, I’d like to emphasise the renewed focus on the private sector, a key player which has to conform with a series of principles and special conditions: measurable impact on development, additionality, neutrality and transparency, shared interests and goals, co-financing, stimulus effect, conformity with labour, social, environmental and fiscal regulations, and respect for human rights. Nevertheless, it has great potential. It is vital that we attract private sector involvement in developing countries. It can make major contributions, beyond the usual rhetoric on MSEs, for example in extending an entrepreneurial mentality.
In this context, the Agency is called upon to promote innovative forms of partnership with private subjects for implementing specific initiatives that benefit developing nations, with particular focus on initiatives in countries with high migration rates or migratory transit rates.

At the same time, we need to compensate for market failures and intervene directly in transit countries to protect the most vulnerable migrants, the voiceless people, in order not to lose entire generations through lack of education, guaranteeing adequate nourishment or civil registration. We need both old and new forms of intervention, such as the Canadian sponsorship system or humanitarian corridors to protect vulnerable groups.

As was emphasised in the New York Declaration of September 19th 2016, migration must be a choice and not a necessity.
But we have to be far-sighted in order to confront our long-term challenges, including that of governance and that of demography. In Africa, estimates forecast 450 million new job-seekers entering the employment market between 2010 and 2035. A massive opportunity (particularly in terms of demographic dividends), but also a titanic challenge in terms of job creation. There are no easy answers, but there are various pilot initiatives which help us to see our horizon.

Let’s get back to work. Thank you. 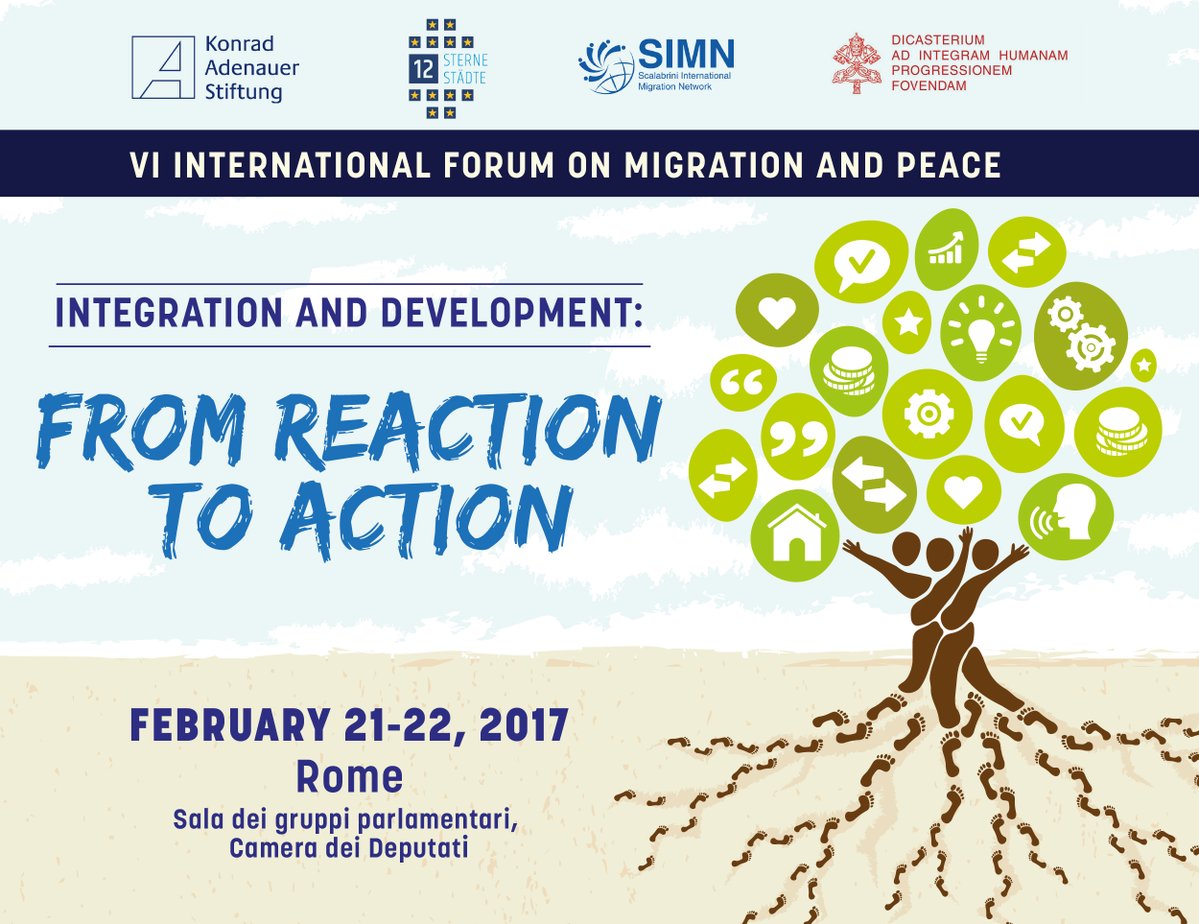 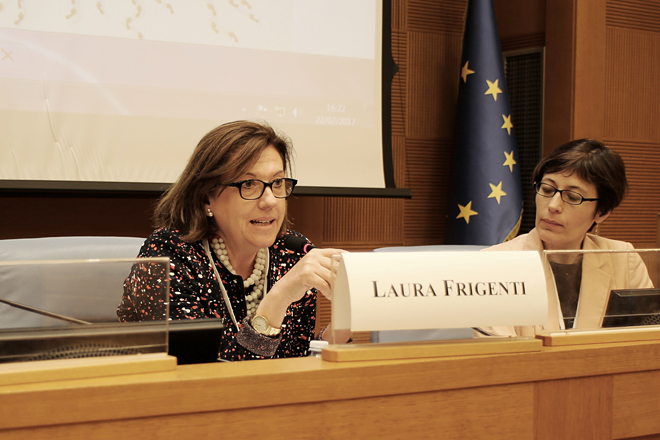 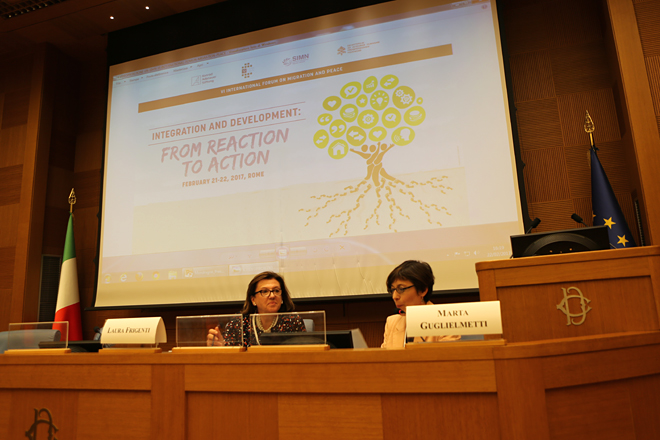