• Over the last 25 years, the global increase in life expectancy – due to improvements in nutrition and hygiene, to vaccination programmes and to improved control of infectious diseases – has been accompanied by a rise in the number of people suffering from chronic non-infectious diseases, obesity and substance abuse. The health effects of globalisation and demographic and social transition have been highlighted in particular by a new study involving 195 nations – “Global Burden of Diseases 2000-2015” – published by The Lancet magazine in November 2016.

The study also underlined how much progress has been overshadowed by the consequences of permanent warfare, fragile state structures and increasing inequalities between nations and within nations. Various Sub-Saharan African countries have achieved notable reductions in maternal and infant mortality rates and deaths caused by HIV/AIDS and malaria, but 24 nations still have maternal mortality rates of over 400 for every 100,000 pregnancies, with particularly high percentages in the Central African Republic, Afghanistan and Sierra Leone.

The famine now widespread in Yemen, the Horn of Africa and South Sudan, and in other African countries, is threatening the lives of 20 million men, women and children. This is a highly complex emergency where natural causes – above all such a prolonged drought – interact with man-made factors. Refugee camps shelter multitudes of displaced people, while migratory movement inside many nations and towards Europe continues to increase due to the insecurity caused by wars, ecosystem degradation and the impoverishment of natural resources.

In low and medium income countries, the rapid transformation of lifestyle induced by the globalisation of trade is producing new forms of malnutrition caused by the use of industrial foods and drinks. These contribute to the spread of heart diseases, diabetes and obesity: an “imminent disaster”, warns the Director General of the World Health Organisation Margaret Chan, for the health of whole populations and for national health systems that must respond to a swelling demand for new services. A “double burden” of infectious and non-infectious diseases is weighing down on poor nations.

Development aid for the health sector continues to grow (in the three-year period 2013-2015, according to OECD-DAC figures, it reached a total of 28.8 billion dollars, an increase of 22% on the previous triennial), but the challenges ahead remains formidable, such as achieving the target of UN Sustainable Development Goal number three: “Ensure healthy lives and promote well-being for all, at all ages.” An increase of between 70 and 90 billion dollars a year would be needed to provide universally accessible health services, a figure corresponding to one third of the total annual health expenditure of the world’s low and medium income nations. In 27 countries out of 34, annual per capita health expenditure is still below 86 dollars, the minimum level necessary for providing basic services. In many poor countries, people have to pay for many medical treatments out of their own pockets, and the WHO estimates that every year 100 million people become poor due to health costs. In order to avoid the poverty-disease trap, the Abuja Declaration signed in 2001 by African Union nations aimed at an increase in domestic health expenses of up to 15% of government budgets, but 16 years later only one of those countries has achieved that goal.

Italy’s traditional Cooperation initiatives are today accompanied by innovative projects for the prevention and control of chronic diseases. The Italian health cooperation, in other words, must confront old and new challenges in priority countries for its aid operations. Italy’s commitments are enshrined in the 2030 Agenda for Sustainable Development, which aims to integrate in one shared framework a series of interdependent goals concerning personal dignity, prosperity, the environment and social justice, as parts of one path to integral human development. AICS has adopted – in its organisational structure too – an approach to human development focused on the richness of human life, i.e. centred on people, opportunities, rights and choices. According to the thinking of the economist Amartya Sen, development does not involve only the economy in itself and the overall resources available in a given society, but also the way that these are distributed and the ways they are used to guarantee fundamental services such as education and health, and to improve everyday living conditions.

For the Italian Cooperation sector, health – understood as a right and at the same time as a condition and opportunity for development – continues to be a priority intervention area that is increasingly integrated with gender equality and women’s empowerment, the rights of minors and people with disabilities, and the struggle against poverty and malnutrition. The guiding principles of Italian health cooperation projects aimed at global health adopt this approach: recommending initiatives involving social protection and countering social, economic and gender inequalities, giving priority to low and medium income countries and to the most disadvantaged groups of their populations. The same principles focus on universal health coverage with fair access to services and financial support, and also on reinforcing health systems on a universal basis via reforms orientated towards fairness, solidarity and social inclusion. Emphasis is also placed on self-determination and community involvement, on vocational training, research and knowledge sharing, on health provision during natural or man-made disasters and on the link between emergencies and development.

Within the perspective of this range of priorities, Italian health cooperation operates in 30 countries through initiatives that use both bilateral and multilateral channels, aid credits, and support from international partnerships such The Global Fund and the GAVI Vaccine Alliance.

Traditional commitments – against infective diseases such as AIDS, tuberculosis, malaria and neglected tropical diseases (in Burkina Faso, Ethiopia and Mozambique), and in support of mother-and-child health, plus in the struggle against malnutrition (as in Niger and Sudan) – are now accompanied by innovative initiatives aimed at preventing and controlling chronic diseases (Palestine, Bolivia) which, as seen above, are a major source of illness and mortality in low and medium income countries.

Always essential is the reinforcement of national health systems and their resilience (in Sudan, Ethiopia, Afghanistan, Iraqi Kurdistan, Lebanon, Bolivia and Peru). Here, primary treatment services are increasingly being orientated towards a family medicine approach (e.g. in Sudan and Palestine), with particular attention focused on maternal and infant assistance and on combating gender violence.

There is a long list of initiatives for which a growing use of resources is foreseen in the coming years, often including multilateral strategies and the actions of civil society organisations: these include supporting reforms that introduce health expenditure financing in order to sustain universal health coverage and improve social protection; the prevention of chronic diseases through technical assistance for partner governments in countering the main risk factors, in part through increased excise duties on harmful products; the reinforcement of services for sexual and reproductive health and rights; the promotion of integrated multi-sector initiatives to improve physical, cognitive and emotional development in the first one thousand days of infancy; the response of health systems to violence against women and girls, in the context of multi-agency intervention; the strengthening of community mental health services and their integration with primary treatment services.

Aid must increasingly be channelled through state-systems, supporting the budgets of national Ministries of Health in order to contribute in a sustainable way to funding for health expenses and to reducing transaction costs. Initiatives must be integrated with programmes capable of favouring the complementary nature and the coherence of the Italian Cooperation system, as indicated in law 125/2014 and by the 2014 OECD-DAC Peer Review. It is therefore important that forms of subsidiarity and task division between cooperation partners are implemented. In other words, it is vital to overcome project fragmentation in the shared reference frameworks provided by nation-programmes, and to aim for greater predictability of financial flow by creating multi-year project funding and by concentrating resources on programmes with greater financial commitment, timespan, impact and sustainability. 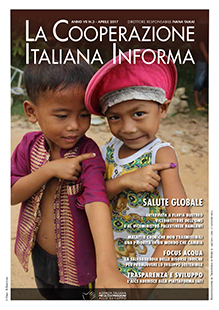