• April 4th was the International Day for Mine Awareness and Assistance in Mine Action, once again marked by the demands of the civil society and the appeal of the Head of State. The Nobel Peace Prize Jody Williams stated to Oltremare: "A world without weapons is possible. Banning landmines, as well as investing in structures and rehabilitation programmes for the hundreds of thousands of people injured in the many conflicts where these armaments have been used, is not just a matter of justice or compensation for the harm done. It also means freeing resources to use in projects that improve the living conditions of people fleeing wars which are all-too-often fought using antipersonnel landmines." The US Nobel Prizewinner widens her perspective and - looking at today’s tragedies, from Syria to the "forgotten" war in Yemen - focuses on the challenge of disarmament: "It is a problem of national laws - she says - but also of the will to apply them on an international scale. It is a matter of political will."

A world without weapons of mass destruction is not a utopia, it’s a healthy and realistic principle. This is why it’s important to build a transnational movement that starts with public opinion and ends by influencing decision-making political centres. In the U.S.A., young high school students are now the protagonists of an extraordinary movement asking the Government for more rigid arms sales measures. Many young people challenging the power of the arms lobby, showing extraordinary determination plus a clarity of purpose that does not lend itself to manipulation of any kind." From a speech in Oltremare, by the American Jody Williams, Nobel Peace Prize winner in 1997 for her work for the international anti-mine campaign. This is the rationale that on April 4 backed the13th International Day for Mine Awareness and Assistance in Mine Action, also in support of the United Nations Mine Action campaign.

The US Nobel winner raises a crucial issue for today and for a future that is increasingly becoming the present: that of military spending. After 13 consecutive years of growth from 1999 to 2013, followed by several years of stabilised spending - according to the latest report by SIPRI, the Stockholm international peace research institute - in 2017 total military spending worldwide rose to $1.739 billion. A marginal increase of 1.1% in real terms compared to 2016. The United States comes top in the list of countries with the highest military spending: 610 billion dollars... more than a third of the world total. Washington has thus put an end to a period, starting from 2010, of decreasing military spending. China lies in second place, with spending rising for the last 29 years... in 2017 estimated at 228 billion, 5.6% more than in 2016. Saudi Arabia comes next: in 2017 it increased its defence budget by 9.2% compared to 2016, bringing it to 69 billion dollars and triggering an increase in arms expenditure across the Middle East, particularly in Iran (19%) and Iraq (22%). In 2017, military spending accounted for 2.2% of world GDP, or $230 per person. Disturbing data, which opens up nightmare scenarios. We don’t have to dream about a world with no armies, or to always demonise any use of military force. That's not the point: if we believe that the resolution of conflicts should not be entrusted solely to the use of force, and that we must intervene on the causes that feed those conflicts - which may be increasing inequality between the North and South of the world, or absolute poverty or the revival of old and new slaveries - then we must tackle the problem of cutting military spending on a global scale. This also means revitalising the anti-mine campaign, reinforcing it with new content.
This is the rationale that on April 4 backed the13th International Day for Mine Awareness and Assistance in Mine Action, also in support of the United Nations Mine Action campaign.

“An unprecedented volume of landmines and unexploded weapons menaces rural areas and urban war zones, mutilating and killing innocent civilians long after the end of the conflict. Roads cleared of explosive devices allow peacekeepers to patrol and protect civilians: when fields are demined and schools and hospitals are protected, normal life can start again. Mine Action is vital. I urge all governments to provide political and financial support to allow anti-mine action to continue, wherever it is needed. In our turbulent world, Mine Action is a concrete step towards peace." With this video message, the Secretary General of the United Nations António Guterres urged the governments of all countries not to abandon their commitment to Mine Action. "The issue of mines and unexploded ordnance is a problem with humanitarian, emergency and development dimensions - said Giuseppe Schiavello, national director of the Italian Campaign against Mines - Our country has been significantly engaged in this cooperation context for many years, and our civil society is highly sensitive to this theme. Italy has gone from having a sad record as a mine-producing country to acting in the vanguard of those working to alleviate the suffering caused by these devices - Schiavello continued - This is why we ask our legislators to activate tools like the 58/01 fund dedicated to Mine Action, and to urgently approve a law prohibiting financial investments in international companies involved in manufacturing arms now banned by our country.

“On this important date, the Italian Campaign against mines and the National Association of Civilian War Victims have asked the Presidents of the Chamber and the Senate, and the Parliamentarians of the 18th Legislature, to immediately work for a rapid and urgent approval, pursuant to Art.136 of the Senate regulations. The bill now numbered S n. 1 - titled "Measures to counteract the financing of companies producing anti-personnel mines, and cluster munitions and submunitions” - in the previous legislature, in the Senate, was numbered DDL S.57 (b). After its final approval (on 3 October 2017), it was returned to Parliament by the President of the Republic (on 27 October 2017), requesting a new resolution complying with Article 74 of the Italian Constitution. This provision, in fact, had already been definitively approved by both branches of Parliament during the previous legislature, but could not come into force due to its incompatibility with Article 7 of the Law of 14 June 2011, n. 95 (the Ratification and execution of the Oslo Convention on the Banning of Cluster Munitions, passed in Dublin on 30 May 2008). This constitutional conflict was then promptly corrected by the Finance and Treasury Commission, which completed its revision of the text but was however unable to proceed to scheduling and discussing the bill, due to the imminent dissolution of Parliament.

Anti-personnel mines have been banned since 1999, but they continue to explode and kill. Every year 6,400 people lose their lives because of landmines, 92% of them being civilians: these are often referred to as "collateral victims". According to the "Worldwide investments in cluster munitions, a shared responsibility", a report compiled by the Dutch PAX Association, over the last four years, 31 billion dollars have been invested in companies that produce cluster munitions. Six companies account for the lion’s share, two of which are located in China (China Aerospace Science and Industry, and Norinco), two in South Korea (Hanwha and Poongsan) and two in the United States (Orbital ATK and Textron). There are 88 financial institutions which, in different ways, prohibit investments in this sector, and 166 financial institutions in 14 countries involved in various ways in financing the explosive devices’ supply chain.

Italy has said no, by approving the bill titled "Measures to counter the financing of companies manufacturing cluster munitions and submunitions.” This law has a seven-year history: the first proposed law on the subject was presented in the Senate in 2010, with the initial signature of Senator Silvana Amati, while Federica Mogherini - today High Representative of the E.U. for Foreign Affairs and Security policy - submitted a similar proposal to the House. Civil Society had backed this move with an online appeal called NOMONEY4BOMBS, which was backed by ten thousand citizens. Now, the time has come to push urgently to make this law operational. In the meantime, numerous activities have been conducted or launched in Italy to inform students about the danger of unexploded ordnance, and about the international cooperation activities to which Italy has been committed for years, in order to fight the plague of unexploded ordnance and its inhuman effects on civilians. These activities involve diplomatic action plus cooperation and emergency aid, and brochures like the one printed by the Italian Anti-Mine Campaign Non-profit organisation and distributed free to schools, universities, parishes, associations and groups. This is a vital educational contribution, because it concerns young people and because it aims at building a "culture of peace" focused on information about ongoing conflicts, and the responsibility that specific countries have for deliberately feeding them. This kind of sensibility also reigns on the highest hill of Rome, institutionally speaking: the Quirinale, home of Italy’s President.

“Thousands of people in the world - civilians, and among them many children, who have already suffered the tribulations of war and extreme poverty - continue to die, or suffer severe injuries, due to anti-personnel mines, cluster bombs and unexploded ordnance", recalled the Head of State, Sergio Mattarella, in his message dedicated to the International Day of 4 April. "The World Day instituted by the United Nations and dedicated to anti-mine action - underlined the President - constitutes an appeal to international public opinion, institutions and expressions of civil societies, to intensify efforts to achieve the goal of concretely erasing these insidious and barbarous weapons, which represent a peak of monstrosity and which the Ottawa and Oslo conventions have rightly banned. Prohibiting anti-personnel mines, and all devices designed to make large areas of territory uninhabitable, represents a vital starting point for ensuring respect for human rights: not only to reduce the number of war victims, but also to prevent the consequences of conflict from continuing to paralyse community life during post-war transition and reconstruction phases. These vile and bestial weapons aim to destroy hope even for those who search for a future for themselves and their loved ones after a war.” "Humanity - concluded Mattarella - must not tolerate this. Our country will continue to give all possible support to international humanitarian organisations involved in demining plans and in clearing areas violated by these deadly devices, to restore them to their inhabitants. A special gratitude goes to those volunteers and associations who, with admirable civil passion, work in war-tormented places to finally reopen the doors to a dignified future. Finally, on this special Day, I repeat my hope that the Italian Parliament may very soon pass a new legislative resolution, consistent with constitutional principles, to effectively cut financial support for companies producing anti-personnel mines and cluster munitions." Italy has adopted state-of-the-art legislation, but in this phase of parliamentary deadlock, people continue to be killed worldwide by mines that are Made in Italy. Accelerating the timetable for passing the law means saving lives. It is our duty to remember that fact. And - even more so - to act upon it. 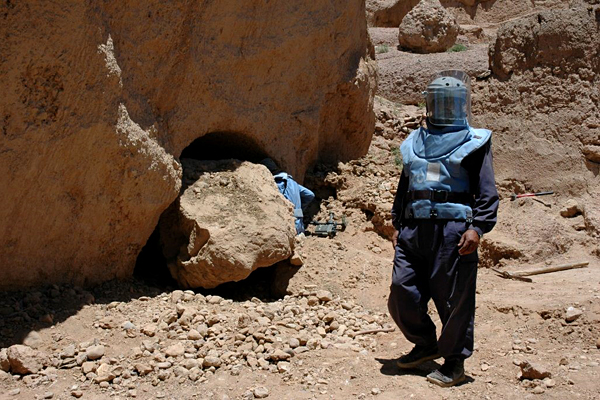 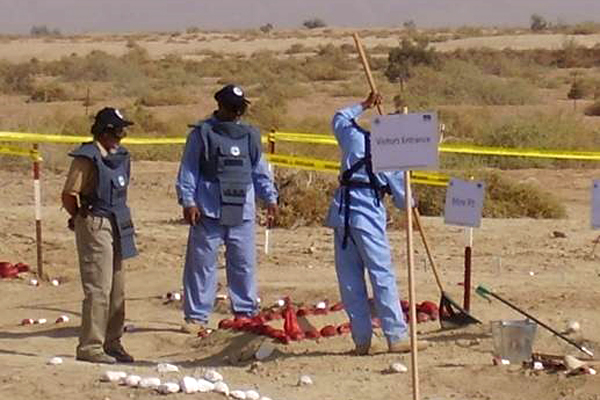 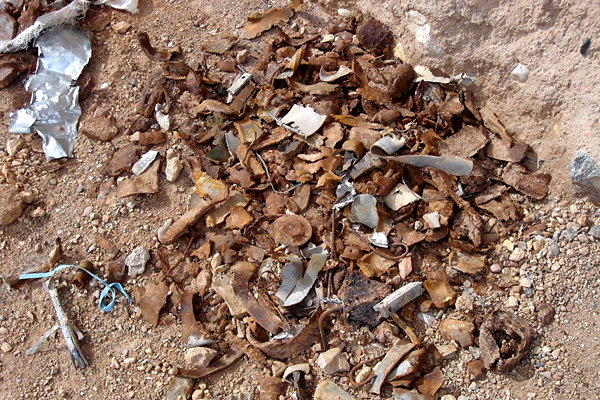 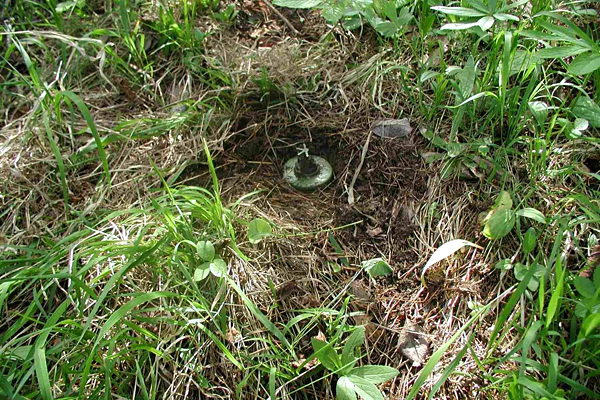